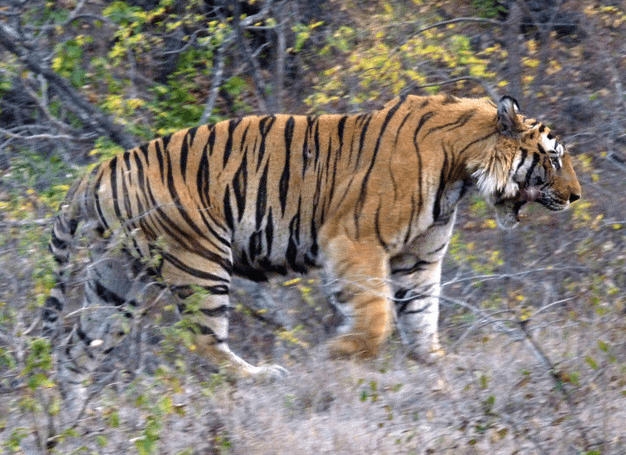 Like other cats and territorial animals, tigers mark their boundaries by spraying their scent. A new technique will allow conservation scientists to take advantage of this chemical language and better track the biggest cats of all, according to new research published in the journal Conservation Genetics Resources.

Tigers, an endangered species, are numbered to fewer than 3,200 in the wild – and their habitat is currently about 7 percent of its historic extent, according to researchers. Conservation groups such as Panthera seek to track the biggest cats that remain, and establish “genetic corridors” to allow new territory for feeding and breeding in the wild.

Using spray, and not just feces, will make that easier, they said.

“Genetic monitoring of tiger source populations is a conservation priority,” said Anthony Caragiulo, a postdoctoral researcher at the American Museum of Natural History’s Sackler Institute for Comparative Genomics. “The utility of this new method is really impactful because it will let us dramatically build up on the number of tigers that can be surveyed and, consequently, increase our understanding of these elusive animals – hopefully before they are gone.”

For several years, the method of monitoring the wild cats has been through analysis of their scat. But fecal matter degrades quickly in tropical landscape, and it is often worthless to researchers.

Scent sprays left on trees and foliage lasts longer, claims the new research. In fact, identification of individual tigers is detected two to eight times more frequently than the scat samples, they said.

The spray consists of a mix of anal-gland secretions and urine, and smells a bit like a floral citrus, said the scientists. By analyzing three captive tigers in Ontario, the museum team was able to genetically “fingerprint” individual cats, they said.

“We recently spent weeks looking for tiger scat in the field with very little luck,” said Rob Pickles, a monitoring specialist for the Panthera group. “Although this new spray technique wouldn’t replace scat studies entirely, we now know that we can use both methods in conjunction to drastically increase our monitoring abilities.

Field testing is due to begin soon, the scientists said.

Reasons to book your holiday with WildTrails