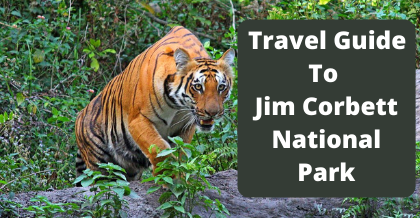 The oldest national park of India, Jim Corbett National Park is in the Northern part of India. Located in the city of Ramnagar in Nainital district of Uttarakhand – the state which is considered as ‘Simply Heaven’ across the globe. The park covers around 520 square Km which covers the major portion of Corbett Tiger reserve and is located around 1300 – 4000 feet from sea level.

Facts and Figures Of Jim Corbett:

Jim Corbett is the only national park in India where the lodges and resorts are located inside the forest. Corbett National Park is one of the thirteen protected areas covered by WWF for Nature under their Terai Arc Landscape Program. The program aims to protect three of the five terrestrial flagship species, the tiger, the Asian elephant, and the great one-horned rhinoceros, by restoring corridors of forest to link 13 protected areas of Nepal and India, to enable wildlife migration.

A total of 488 different species of plants have been recorded in the park. The forest is most known for sighting of the royal Bengal Tiger. However, over 500 different species of flora and fauna can be found throughout the area. Common sightings are Langurs, sloth bears, Asiatic black bears, Indian grey mongooses, jungle cats, elephants, wild boars, spotted deer, barking deer, and Indian antelope. Reptiles and amphibians include a variety of snakes (including cobras and pythons) and species of crocodiles (notably gavials and muggers).
Bird watching is one of the best to do here as the park receives many species of migratory birds.

There are 6 major zones in Jim Corbett National Park where the tiger sighting is maximum. The most popular zones are Dhikala zone, Bijrani zone and Dhela zone which can be considered as core zones. These are the areas where the sightings are maximum as per the data. The buffer zones include Jhirna, Durga Devi and the newly Sitabani zone.

Distance between the zones- 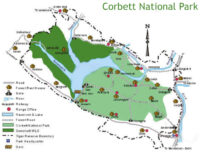 The most exciting and sought after safari options in the park, elephant safari not only affords you the closest encounter with the fascinating inhabitants of the jungle, but also takes you to some of the core areas that are otherwise impossible to access, even with jeeps or open canters.

Zones: The popular zones for elephant safari are Bijrani and Dhikala.

NOTE: The safaris are conducted on the first come first serve basis and needs no prior booking.

A single jeep can accommodate a maximum of 6 tourists. Exclusive only to the group. Expert tiger tracker from WildTrails provided. With exclusive jeep safari, the customer will be picked up from the resort to safari point and dropped back for every safari.

Summers: Like the canter safaris, jeep safaris during the summer starts at around 06:00 in the morning and continues till 09:00 in the morning. The next batch of jeeps are allowed into the jungles between 03:00 – 06:00PM.

Keeping in mind about the visibility constraint during the winters, the first batch of jeeps are allowed between 07:00 to 10:00 in the morning. Following this, the second batch starts at around 02:00PM and continues till 05:00 in the evening.

Jeep safaris are allowed to all the four different zones of the park. However, the number of jeeps allowed might vary according to the Forest Permit.

NOTE: Since the number of jeeps permitted varies according to the zones, it is advisable to book the safaris well in advance; 30 days is the suggested time frame.

Conducted and operated by the forest officials, canter safaris are yet another way to go deep into the wilderness of Jim Corbett Park. If you’re travelling in a large group of 16-18 people, open-roof canters are the most ideal way to enjoy wildlife safaris.

Winters: Safaris during the winters start by around 06:00 in the morning and closes down by around 11:00. The last batch of canter is allowed into the forests between 11:00AM to 04:00PM only.

Zones: Among all the four buffer zones, only Dhikala Zone is open for canter safaris.

NOTE: Since the safaris are carried out in eco-friendly zone, visitors should carry a disposable bag to carry back their leftovers and leave no trace within the park. Also, alcohol and non-vegetarian foods are strictly not allowed during the safaris.

Get Your Jim Corbett Safari Packages

The best time to visit Jim Corbett National Park is anytime between November and May. The park is closed during the monsoon season between June and October. The temperature will be lowest from October to February. The best time to visit exclusively for tiger sighting is between March to May, since it is summer and the wildcats roam around to quench their thirst.

How To Reach Jim Corbett

If you are coming from Delhi, you can board any trains between Delhi and Ramnagar; headquarter of Jim Corbett Park. From Ramnagar, you can easily reach the park by hiring a taxi. Trains to Ramnagar are also available from other cities like Lucknow, Varanasi and Allahabad; all these trains travel through Kanpur.

Ramnagar is well connected by roads to cities like Delhi, Haridwar, Bareily, Nainital, Ranikhet, and Dehradun, via the route to Gajraula, Moradabad and Kashipur. You can also visit Ramnagar from other places like Haldwani, Kashipur and Kathgodam.

If you are travelling by flight, Phoolbagh in Patnanagar will serve as the nearest airport to Jim Corbett.