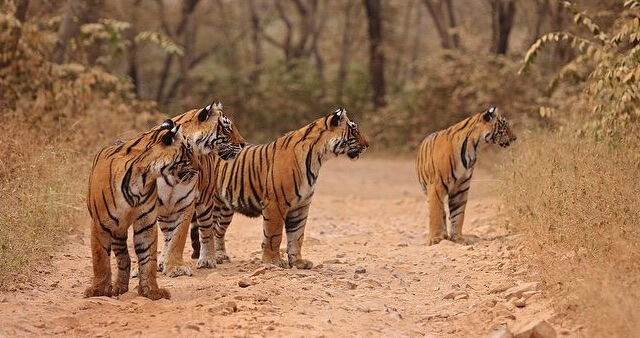 India logged a 30% rise in number of tigers in the last 5 years – thanks to huge conservation efforts as well as very strict anti-poaching measures and today we have the highest number of tigers in the Wild (2226 out of 3500 – or 63% of all the global total). Signs of tigers migrating to Bannergatta National park (which is just 36 kms away from bangalore) from Cauvery Wildlife Sanctuary and also Tiger being caught at Wayanad border which wandered out of the forest are clear signs of increase in the number of tigers (Tigers are very lonely & territorial and they moving out is a clear sign of increase in the number of tigers and they coming out in search of new territory). (Darn we now need to increase their Habitat and this clearly lies with the State governments!!).

With the increase in the number of tigers comes increased foot falls to the forest (believe me, there is nothing as enthralling as spotting A Tiger walking in its majestic gait in its natural habitat – not even Taj Mahal 🙂 )

Sanjay Singh, Director, Dudhwa National Park, throws light on the rise in tourism at the park in the last year. “This season, we catered to almost 25,000 visitors during the season, which is an increase of al most 20% from last season. We have visitors from all over India and not just the state visiting the park. Keeping the rush in mind, we have earmarked the eco-tourism zones as per the direction of the Supreme Court and developmental activities are underway for the upcoming season.”

Rajiv Arora, owner of Rayhaan Travels, tells us, “Among Lucknowites, packages to Dudhwa National Park and Corbett Tiger Reserve are extremely popular. Lately, Katarniya Ghat Wildlife Sanctuary , which is close to Bahraich, has also started emerging as a tourist destination. People have started taking shorter holidays. Weekend getaways to these places, which are within driving distance from Lucknow, completely fit the bill. In fact, during peak season, which is mostly during the summer vacations, it is very difficult to get bookings at these places as they’re completely full.”

“We have organized packages for school groups, individuals and even corporate firms who take their employees for team-building exercises there. Corporate conferences at resorts in the wild are very common. The main reason is that the entire activity works out to be very economical.Packages start from almost `2500 per person per day and can be customized as per the client’s demand, depending upon the type of place they want to stay . There are camps as well as luxury resorts,” says Rajiv.

Hina Zaidi, director, sales, Sheeraz Tours & Travels, adds, “In the last 2-3 years, we have seen a considerable rise in the interest of travelers to these reserves. During peak season, we get almost 40 queries per week for short-weekend packages to these places. A 3 nights-4 days package to a wildlife reserve is the most popular among vacationers. People have moved beyond holidays that include too much on their itinerary . They now prefer experiential holidays where one can relax.”

Ratindra Pandey , Tourism Development Officer, UP Tourism, tells us, “Seeing the rise in the tourism at Dudhwa National Park in the last year or so, UP Tourism has elaborate plans for Dudhwa National Park.We have completely revamped our existing facility , the Tiger’s Den, and are coming up with an improved one replete with luxury rooms and a multi-cuisine restaurant. Additionally , we have planned packages and organized tours for different groups like students, corporates and individuals which will kick off from November. Work is underway to install major signages and improve the infrastructure in the area.”

Vikas Singh, a city-based businessman and a wildlife enthusiast, has visited almost all the known tiger reserves in the country . “I’ve been visiting wildlife reserves religiously since the past 18 years. Dudhwa, Corbett, Katarniya, Kanha, Panna, Pench, Ranthambore, Bandhavgarh, and even sanctuaries in Mauritius – I’ve visited all of them. Every year, I go to Corbett and another chosen sanctuary for a trip. The feel of the jungle never fails to excite me. Even though I’ve spotted the tiger on 18-19 different occasions, it is an altogether different experience every time. I have a portfolio of almost 100 pictures of tiger spotting on different trips. My son is also a wildlife enthusiast and my wife has also grown to love the experience now,” he says.

Vikas Jain, an executive with a real estate firm, was part of his company’s team-building activity at Corbett National Park earlier this year. “Our company took a group of around 40 executives who had achieved their targets to Jim Corbett for three days. We were all staying in a resort with a number of in-house activities planned for us. A safari was also a part of the itinerary. Even though we didn’t spot the tigers, it turned out to be a good opportunity to unwind,” says Vikas.

“People typically go there for luxury vacations, as tariffs at the resorts there can go up to almost 30,000 per night. In spite of the high prices, we have almost 20 groups going there per month during peak season, which is from October to June,” says Gagan Gurnani, owner of Dreamway Travels.

Sharad Thadani of Mayfair Travels, adds, “Ranthambore National Park in Rajasthan has emerged as a favored traveling destination in the last couple of years. A lot of foreign celebrities are also known to visit there, which has fueled the interest among local travelers. They are willing to undertake short luxury vacations to the high-end cottages in the reserve.”

Prarthana Dalmia, a dentistry student in the city , went for a short family vacation to Ranthambore National Park recently . “We hadn’t taken a family vacation in ages due to unmatched schedules. So my parents, brother, sister-in-law and I went on a short three-day trip to Ranthambore recently and the experience was fabulous. The point is not just a jungle safari; the entire experience of staying in a beautiful resort in the wild is beautiful. It really helped us unwind,” she says.

Conclusion is simple, Wildlife tourism is becoming really big part of the Indian vacationing as well as for corporate outing to unwind in the wild and of course tiger is the lead actor around which everything is revolving and no wonder he is the king of the Jungle (remember Lion is never a habitat of jungle but of Savannahs and calling him the king of the Jungle is not apt I feel :-))!!

To get the detailed info of the place, best season & time to visit, how to get there, safari details / boating/ trekking details, list of animals/birds you can expect to see there , entry/camera fees, and of course all of the accommodations nearby, please download the app or send us an inquiry:

PS: Please be a responsible wildlife tourist; While in the forest  – no littering, no sounds, no feeding, no getting down from the safari jeep, no calls (put your cell phones to airplane mode or switch off). Remember we are visiting their home and when we are there, let’s follow their rules.