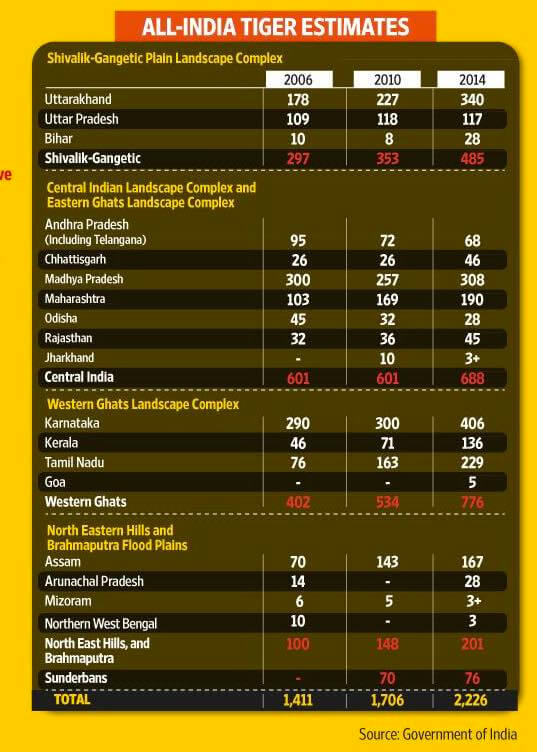 The number of tigers in India has increased by almost a third in the last three years, official figures released on Tuesday reveal.

The rise, from 1,706 in 2011 to 2,226 in 2014, will encourage campaigners fighting to protect the endangered species. Activists called the new statistics “robust” and “very good news”. 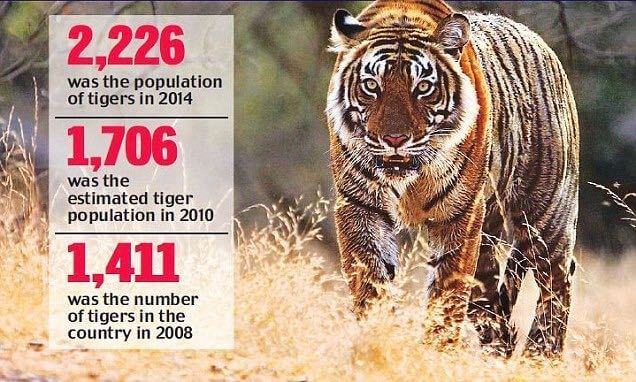 Around 70% of the world’s wild tigers live in India, where their habitat has been threatened by uncontrolled development and poaching.

Repeated efforts to stem trade and protect tigers from environmental pressures failed to stop their numbers in India dwindling to 1,411 in 2006.

Prakash Javadekar, the environment minister in the emerging south Asian power, said the latest figures showed a huge success story and demonstrated that the current strategy of creating reserves staffed by specialist government staff was working.

“That is why we want to create more tiger reserves. This is a proof of India’s biodiversity and how we care for mitigating climate change. This is India’s steps in the right direction, which the world will applaud,” he said.

Belinda Wright, of the Wildlife Protection Society of India (WPSI), said the increase in tiger numbers could be attributed to a new focus over the last three or four years which has led to better field patrolling and monitoring, among other factors.

“There still remains the habitat destruction and encroachment. Hopefully the new figures will increase the pressure on the government to tread carefully when it is a matter of development in tiger habitats,” Wright said.

The new census was conducted by the National Tiger Conservation Authority and involved nearly 10,000 camera traps. Almost 80% of the tigers counted in the survey had been photographed and identified individually, Javadekar said.

Most of India’s tigers live in nearly 50 wildlife reserves set up since the 1970s.

The natural habitat of tigers in India – tropical evergreen forests, deciduous forests, mangrove swamps, thorn forests and grass jungles – has almost disappeared outside reserves. Even inside designated zones, unchecked development of tourism and other industries has restricted space and food. Many end up foraging in areas with large human populations, leading to fatalities.

Last year specialist hunters on elephants tracked a tiger in northern India that may have killed as many as 10 people on a 150-mile journey through villages, fields and forests, during which it crossed rivers and six-lane motorways.

“We must ensure animal-human conflict does not happen,” said Javadekar. “We have proactively decided that we will create more grasslands and water storage in forest areas so that animals can live well.”

In 2013 India’s supreme court imposed a temporary ban on tourism in the areas of national parks where tigers live. It was lifted after four months, thanks to vociferous protests from tour operators and guides.

However governance appears to be the main factor. In Uttar Pradesh, the lawless and poor northern state, tiger numbers have fallen, officials have said, with some reserves losing almost half of their population.

Demand for their body parts for use in traditional medicine in China and elsewhere in east Asia remains robust. Leopards and rhinos are also targeted. Prosecution of poachers is rare, convictions rarer and intelligence-led preventive policing non-existent.

Wright, the conservationist, said a major problem was the lack of corridors linking reserves which would permit tigers to travel in search of mates outside their immediate community.

“We need to focus on tiger landscapes and gene-flow. Tigers need to disperse from the source population,” she said.

The current tiger population is a fraction of the 45,000 that roamed India a century ago.