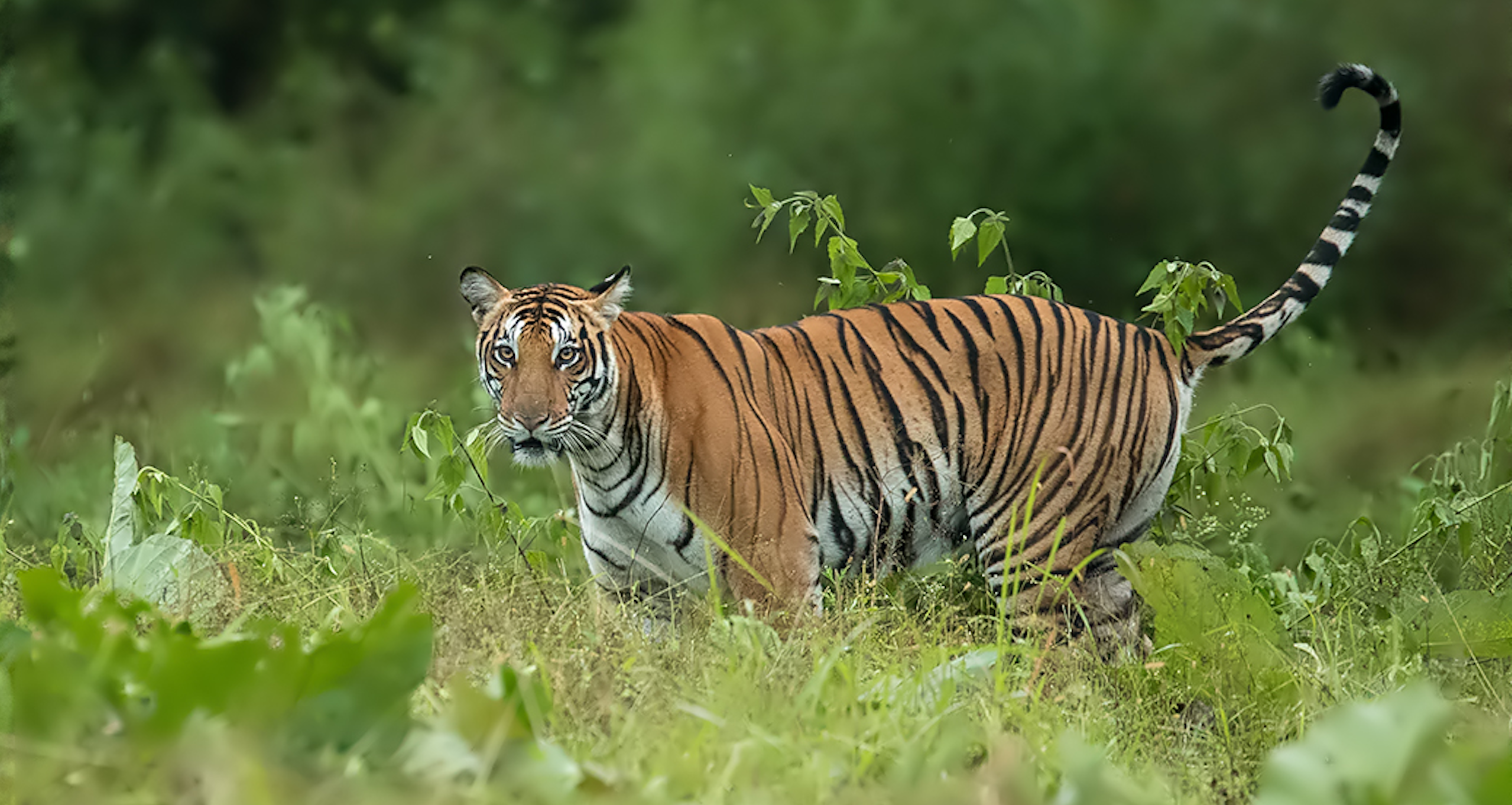 This article talks about South India’s Big 5, the most popular wildlife of South India that visitors love to sight and photograph. This list applies to all of South Indian jungles namely Kabini, Bandipur, Bhadra, Biligiri Ranga Temple (BRT), Mudumalai, etc. So all are per se Kabini Big 5, Bandipur Big 5, Bhadra Big 5, etc.

When choosing a safari holiday in Africa, the term the ‘Big Five’ will often crop up and refers to some of Africa’s most popular wildlife, the lion, African elephant, Cape buffalo, leopard, and rhinoceros. The phrase itself was coined by African hunters and refers to the five most difficult and dangerous animals to hunt on foot. Of course, Big Five safaris are in no way associated with the unethical act of trophy/canned hunting anymore (banned completely in Kenya and increasingly so in other areas of Africa) but the term is still used by most guides and tourists as an easy term to encapsulate the must-see animals.

So building on the African popular Big 5, WildTrails has worked on what we feel suits best for South India’s Big 5 and here is our list and the reasoning behind it.

The tiger is the largest species among the Felidae and classified in the genus Panthera. It is most recognizable for its dark vertical stripes on reddish-orange fur with a lighter underside. It is an apex predator, primarily preying on ungulates such as deer and bovids. It is territorial and generally a solitary but social predator, requiring large contiguous areas of habitat, which support its requirements for prey and rearing of its offspring. Tiger cubs stay with their mother for about two years, before they become independent and leave their mother’s home range to establish their own.

The tiger once ranged widely from Eastern Anatolia Region in the west to the Amur River basin, and in the south from the foothills of the Himalayas to Bali in the Sunda islands. Since the early 20th century, tiger populations have lost at least 93% of their historic range and have been extirpated in Western and Central Asia, from the islands of Java and Bali, and in large areas of Southeast and South Asia and China. Today’s tiger range is fragmented, stretching from Siberian temperate forests to subtropical and tropical forests on the Indian subcontinent and Sumatra. The tiger is listed as Endangered on the IUCN Red List since 1986. As of 2015, the global wild tiger population was estimated to number between 3,062 and 3,948 mature individuals, down from around 100,000 at the start of the 20th century, with most remaining populations occurring in small pockets isolated from each other. Major reasons for population decline include habitat destruction, habitat fragmentation, and poaching. This, coupled with the fact that it lives in some of the more densely populated places on Earth, has caused significant conflicts with humans.

The tiger is among the most recognizable and popular of the world’s charismatic megafauna. It featured prominently in ancient mythology and folklore and continues to be depicted in modern films and literature, appearing on many flags, coats of arms and as mascots for sporting teams. The tiger is the national animal of India, Bangladesh, Malaysia, and South Korea.

Tigers are plenty in south Indian jungles but then again very tough to sight them. Use the WildTrails App/Web to find the sighting index to see where the sightings have been good.

The Indian leopard is a leopard subspecies widely distributed on the Indian subcontinent. The species Panthera pardus is listed as Vulnerable on the IUCN Red List because populations have declined following habitat loss and fragmentation, poaching for the illegal trade of skins and body parts, and persecution due to conflict situations. The Indian leopard is one of the big cats occurring on the Indian subcontinent, apart from the Asiatic lion, Bengal tiger, snow leopard, and clouded leopard.

The leopard is the smallest of the four big cats, among the tigers, lions, and jaguars. Leopards are found mainly in sub-Saharan Africa, and in South Asia (India, China, Malaysia, and Indonesia).

Leopards have a comparatively long body and short legs, with a large skull and powerful jaw. They look similar to the jaguar, however, they are smaller and lighter and the fur patterning is slightly different. On a leopard, the rosettes (circular markings on their fur/skin) are smaller and more closely spaced together, and don’t usually have black spots in the center of the rosettes like jaguars do. The leopard’s rosette pattern and overall color can vary slightly, however, depending on where they live. Also, Jaguars are mainly found in the Americas and have short tails and legs and are quite stocky, but they are powerful and sturdy and are good swimmers.

BTW There is no actual species called the panther, however, “panther” is a name given to either leopards or jaguars that have all black coats, due to an excess of the dark pigment melanin. They can also be referred to as melanistic leopards or melanistic jaguars. While the coat is usually all black, sometimes the rosette markings can just be seen if you look closely. Leopards are plenty in south Indian jungles but then again very tough to sight them. Use the WildTrails App/Web to find the sighting index to see where the sightings have been good. In Kabini, we do have a Black Panther and if you are super lucky, you might get to see it.

The dhole is a canid native to Central, South, and Southeast Asia. Other English names for the species include Asian wild dog, Asiatic wild dog, Indian wild dog, whistling dog, red dog, and mountain wolf. The dhole is a highly social animal, living in large clans without rigid dominance hierarchies and containing multiple breeding females. Such clans usually consist of 12 individuals, but groups of over 40 are known. It is a diurnal pack hunter which preferentially targets medium- and large-sized ungulates. In tropical forests, the dhole competes with tiger and leopard, targeting somewhat different prey species, but still with substantial dietary overlap.

It is listed as Endangered by the IUCN as populations are decreasing and are estimated at fewer than 2,500 adults. Factors contributing to this decline include habitat loss, loss of prey, competition with other species, persecution due to livestock predation and disease transfer from domestic dogs.

They are found all across south Indian parks and but again very tough to spot and if you do, you probably see a pack of them roaming, playing and or resting!!

It’s found throughout South India and almost easy to sight across most of the popular parks.

The sloth bear is native to the Indian subcontinent. It feeds on fruits, ants, and termites. It is listed as Vulnerable on the IUCN Red List, mainly because of habitat loss and degradation. Its body is 5 to 6 feet long, and it has a thick, shaggy coat of fur, which varies in color from auburn to black. Its chest is marked with a distinctive white V, and it has a light-colored snout. Males, weighing 175 to 310 pounds, are larger than females, which weigh only 120 to 210 pounds. Its tail is 6 to 7 inches long, the longest in the bear family and its footprint is very similar to that of a human. Due to the warm climate in which the sloth bear resides, it does not hibernate during the winter, as many northern bear species do.

There are many in South India across all popular national parks but very hard to sight one. If you do, consider yourself very lucky!! Same applies to Bandipur or Bhadra but your chances of seeing one are very high in Daroji Sloth Bear Sanctuary near Hampi, approx 350 kms north of Bangalore.

HOW ABOUT BLACK PANTHER?

You also get to sight (if you are damn lucky) Black Panther in Kabini but it is not listed in Big 5 as it is not a separate species by itself but a skin condition of the regular leopard. due to an excess of the dark pigment melanin. They can also be referred to as melanistic leopards

What we do at WildTrails?