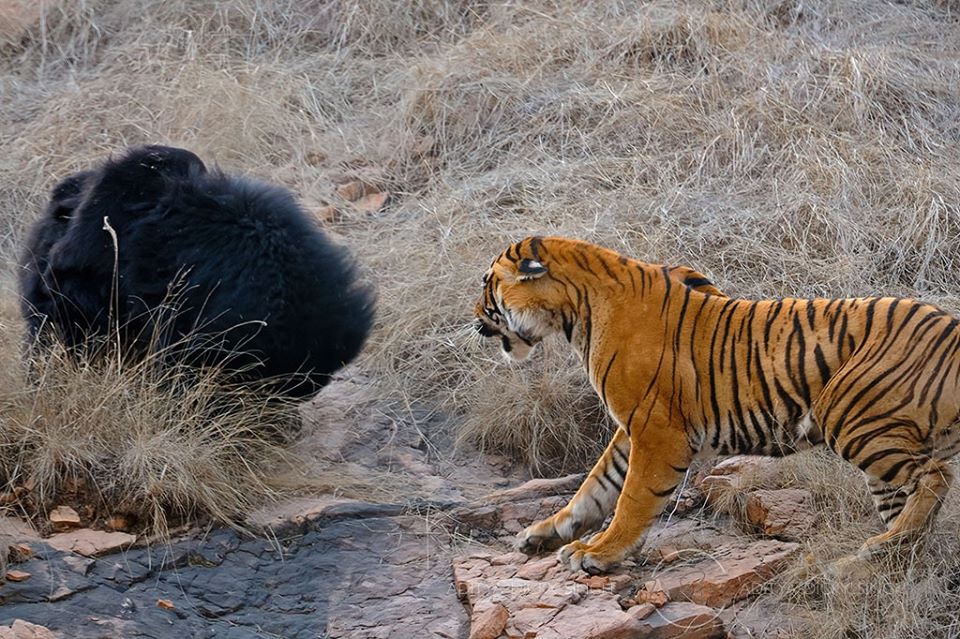 It was a hot day, and the temperature measured around 35-degree Celcius, a male tiger (T54), was sighted cooling off in a water body, and a female sloth bear with her sub-adult cub walks to the same water hole. what happened next was one of the rarest natural history moments captured (Tiger | sloth bear in Tadoba). This mother sloth bear goes to great lengths to protect her cub from a tiger. This sloth bear battled a tiger to keep her cubs safe. The heat & scarcity of water leads animals to assemble at common waterholes. Sharing a common water hole can lead to danger like this. the fight began when the sloth bear and its cubs approached where the tiger was quenching its thirst. The tiger immediately charged the bear when it reached the water. This fight went on for 15 mins. Mother will go any length to protect her kid and that’s exactly happened here. During the fight, each animal is likely to have sustained notable injuries, but the sloth bear mother was able to protect its cubs from the tiger. T54 comes back to the waterhole totally exhausted and tired.

The above picture is taken from Ranthambore National Park:  All this while Ustaad, the male tiger, was watching his team lose. I think this was too much for the king of the jungle’s ego and he decided to get involved. A dominant male tiger is one powerful animal, but little did he know that his opponent was a very brave and determined mother fighting for the survival of her babies. The moment Ustaad got involved all hell broke loose. The bear got up on her real legs and started swinging her powerful arms while screaming at the top of her voice. There were a lot of furs and blood flying. You could hear them fight a mile away.