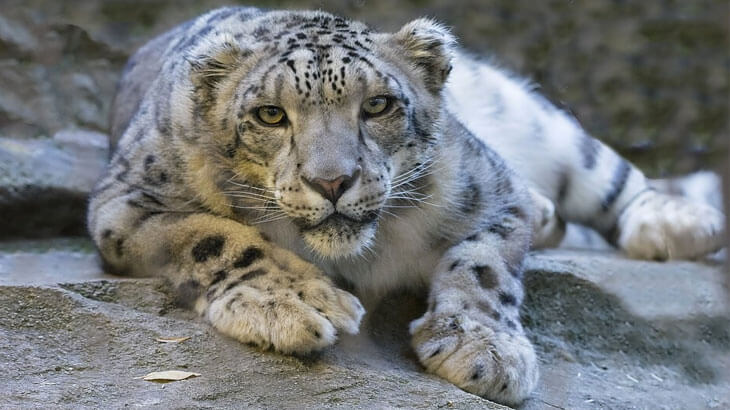 
Below is the complete list of all wildlife sanctuaries of Punjab including national parks, bird sanctuaries, forest reserves of Himachal Pradesh, India

The snow leopard or ounce is a large cat native to the mountain ranges of Central and South Asia. It is listed as Endangered on the IUCN Red List of Threatened Species because, as of 2003, the size of the global wild population was estimated at 4,080–6,590 adults. Fewer than 2,500 individuals may be reproducing in the wild. As of 2016, estimates for the size of the global population vary from at least 4,080 to about 8,700 individuals.

Taxonomically, the snow leopard has been classified as Uncia uncia since the early 1930s. Based on genotyping studies, the cat has been considered a member of the genus Panthera since 2008. Two subspecies have been attributed, but genetic differences between the two have not been settled.

Potential snow leopard habitat in the Indian Himalayas is estimated at less than 90,000 km2 (35,000 sq mi) in the states of Jammu and Kashmir, Uttarakhand, Himachal Pradesh, Sikkim, and Arunachal Pradesh, of which about 34,000 km2(13,000 sq mi) is considered good habitat, and 14.4% is protected. In the beginning of the 1990s, the Indian snow leopard population was estimated at roughly 200–600 individuals living across about 25 protected areas

Snow leopards have long, thick fur, and their base color varies from smoky gray to yellowish tan, with whitish underparts. They have dark grey to black open rosettes on their bodies, with small spots of the same color on their heads and larger spots on their legs and tails. Unusually among cats, their eyes are pale green or grey in color.

Snow leopards show several adaptations for living in a cold, mountainous environment. Their bodies are stocky, their fur is thick, and their ears are small and rounded, all of which help to minimize heat loss. Their paws are wide, which distributes their weight better for walking on snow, and have fur on their undersides to increase their grip on steep and unstable surfaces; it also helps to minimize heat loss. Snow leopards’ tails are long and flexible, helping them to maintain their balance, which is very important in the rocky terrain they inhabit. Their tails are also very thick due to fat storage and are very thickly covered with fur, which allows them to be used like a blanket to protect their faces when asleep.

The snow leopard has a short muzzle and domed forehead, containing unusually large nasal cavities that help the animal breathe the thin, cold air of their mountainous environment.

The snow leopard cannot roar, despite possessing partial ossification of the hyoid bone. This partial ossification was previously thought to be essential for allowing the big cats to roar, but new studies show that the ability to roar is due to other morphological features, especially of the larynx, which are absent in the snow leopard. Snow leopard vocalizations include hisses, chuffing, mews, growls, and wailing.

Snow leopards were only reclassified as a member of the Panthera genus (big cats) following a genetic study by Mr Brian Davis, Dr Gang Li and Professor William Murphy in 2009. This study showed that snow leopards actually evolved alongside tigers and not leopards as previously thought.