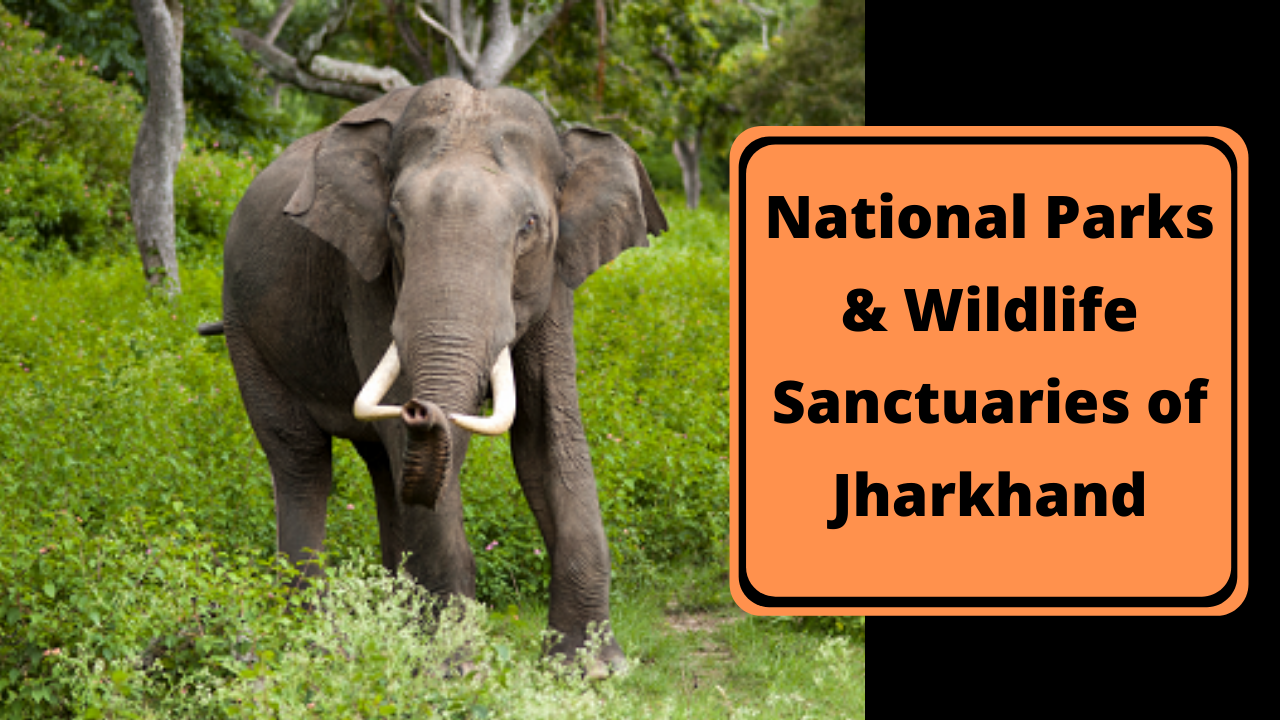 
Translated to Hindi as the land of forests, Jharkhand was formed in the year 2000. It is the 15th largest state in India with an area of around 79,710Sq Kms and is blessed with forests, wildlife, and waterfalls. Jharkhand is famously known as heaven for nature lovers. Be it family, friends, kids, or parents Jharkhand has something or the other to offer when it is seen as a tourist destination. Bokaro attracts students and trainees from all over the globe to help in the research and development of the steel manufacturing unit. Jamshedpur makes way to students and researchers interested in training and conducting research.

The state name translates into the Land of Forests, there a lot of forest areas are conserved to protect wildlife and nature. Here are the famous national parks and wildlife sanctuaries in the state-

Below is the complete list of all wildlife sanctuaries & national parks including bird sanctuaries, forest reserves of Jharkhand, India

Betla was one of the first national parks to become a tiger reserve under Project Tiger, in 1974. The park is located  in the Latehar and Palamu district of Jharkhand. Speaking about the flora here, the forests have a vast range of vegetation consisting of sal and bamboo as the major components along with a number of medicinal plants.

The park has a variety of diverse ecosystems and abundance of wild animals. Elephants are usually seen in large numbers between the end of the monsoon season, and the time when water holes begin to dry in March.

The park is home to predators like the sloth bear and panther, while scavengers include the wolf, jackal, and hyena. Other creatures include large herds of gaur and chital, large families of langurs, monkeys, giant squirrels, mouse deer, sambhar deer, four-horned antelopes, nilgai, kakar, Civets, pangolin, porcupine and mongoose. White tigers were transported to zoos a while ago.

There are elephant rides and jeeps available with guides for exploring the park. Watch towers and ground hides have been built to get the best sighting of wildlife.

While the park is open throughout the year, the wildlife sightings are highest in summer (May to June. The recommended time to visit in terms of climate is between November and March.

Dalma is known as a paradise for elephants. The count goes to 100 in number in the peak of summer where the waterholes deep inside the sanctuary quench their thirst.

Previously popular as Hazaribagh National Park is 89 km north of Ranchi. Established in 1955, the forest reserve is located in low hilly terrain, at an average altitude of 615 metres (2,018 ft), it has an area of 184 square kilometers.

Several dams have been built and more are in process of construction. The purpose is to create pools of water where the animals may drink in summer. Hazaribagh is home to species like sambar, nilgai, chital, peafowl, sloth bears, black bears, hyenas and pigeons.

Located in the Koderma district of Jharkhand, the forest reserve is spread across 15062.77 hectare. The reserved forest is declared as a wildlife sanctuary under administrative control of wildlife division, Hazaribagh. The popular trees in Koderma forest reserve are Sal, Bija, Gamhar, Khair, Palash, Salai, Semal, Bair, Arjun, Karam, Siris, Kaj, Kend, Mahulan, Mahua, Karanj, Ratti, and so on.

Located in the Chatra district in the state of Jharkhand, the sanctuary is surrounded by the Amanat River in the south, the Chako River in the west and the Lilajan River in the north-east.

The wildlife sanctuary is covered with Northern Tropical Dry Deciduous Forests. The forests are diversified in nature and the canopy is moderately close with trees of good height and diameter growth. The ‘sal’ tree is found all over. It is spread over an area of 207 square kilometers.

Mahuadanr sanctuary is situated in the scenic Chechari Valley in Mahuadanr village, Latehar district, approximately 200 km from the capital city, Ranchi. It is popularly known as the only Wolf sanctuary of India.

The wolves normally visit the breeding dens built within the forest area from October to November and February to March every year, making it the best time to visit. The sanctuary remains closed during the monsoon.

Part of Betla National Park, Palamau wildlife sanctuary is one of the nine original tiger reserves in India. The area in Latehar District was protected under the Indian Forests Act in 1974. Earlier, the area was used for cattle grazing and camping; it was acutely prone to forest fire. The tiger reserve has a total area of 1,129.93 square kilometres with a core area of 414.93 sq. km and a buffer area of 650 sq. km.

Located 25 km from Gumla and 92 km south east of Ranchi, Palkot Wildlife sanctuary was established in the year 1990. The forest reserve is covered with dry deciduous forests. elephants, leopards, bears jackal, monkey, porcupine, hare, and many more to look upon here.

Surrounded by the lush greenery, as the famous Parasnath hills with one of the best picturesque places in Jharkhand. Also, it is the highest point from the sea level in Jharkhand. The wild fauna comprises Leopard, sloth bear, sambhar, nilgai, barking deer, monkey, mongoose, jungle cat, porcupine, hyena, and so on. The flora part comprises mixed deciduous forests with high incidence of climbers.

Do’s and don’t’s while on safari:

Groom up right for the adventure

Do not miss your camera.

Always have an expert guide

No feeding to animals

Cellphones switched off throughout the drive

No smoking or liquors

Do not over rely on properties for safari vacations.

Why To Book With WildTrails