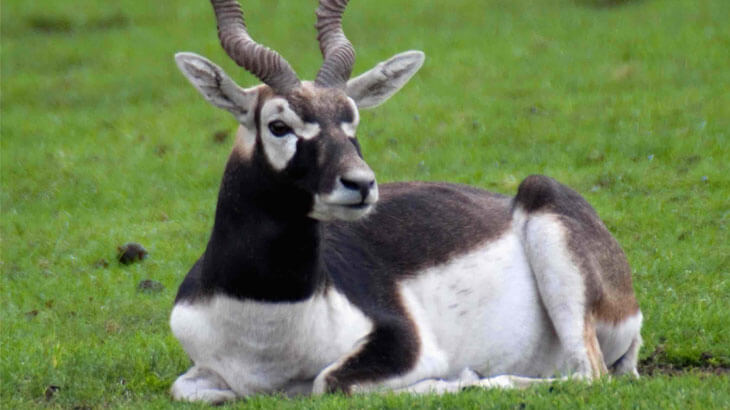 
Below is the complete list of all wildlife sanctuaries of Punjab including national parks, bird sanctuaries, forest reserves of Punjab, India

State Animal of Punjab is:  BlackBuck

The blackbuck, also known as the Indian antelope, is an antelope found in India and Nepal.  It stands up to 74 to 84 cm (29 to 33 in) high at the shoulder. Males weigh 20–57 kilograms (44–126 lb), an average of 38 kilograms (84 lb). Females are lighter, weighing 20–33 kilograms (44–73 lb) or 27 kilograms (60 lb) on an average. The long, ringed horns, 35–75 centimeters (14–30 in) long, are generally present only on males, though females may develop horns as well. The white fur on the chin and around the eyes is in sharp contrast with the black stripes on the face. The coat of males shows two-tone colouration: while the upper parts and outsides of the legs are dark brown to black, the underparts and the insides of the legs are all white. On the other hand, females and juveniles are yellowish fawn to tan.

The blackbuck is a diurnal antelope (active mainly during the day). Three kinds of groups, typically small, are the female, male and bachelor herds. Males often adopt lekking as a strategy to garner females for mating. While other males are not allowed into these territories, females often visit these places to forage. The male can thus attempt mating with her. Herbivores, blackbuck graze on low grasses, occasionally browsing as well. Females become sexually mature at eight months, but mate no earlier than two years. Males mature later, at one-and-a-half years. Mating takes place throughout the year. Gestation is typically six months long, after which a single calf is born. The lifespan is typically 10 to 15 years.

The blackbuck inhabits grassy plains and slightly forested areas. Due to their regular need of water, they prefer areas where water is perennially available.

The antelope is native to and found mainly in India, while it is extinct in Bangladesh. Formerly widespread, only small, scattered herds are seen today, largely confined to protected areas. During the 20th century, blackbuck numbers declined sharply due to excessive hunting, deforestation and habitat degradation. The blackbuck has been introduced in Argentina and the United States. The International Union for the Conservation of Nature and Natural Resources (IUCN) lists the blackbuck as Near Threatened. In India, hunting of blackbuck is prohibited under Schedule I of the Wildlife Protection Act of 1972. The blackbuck has significance in Hinduism; Indian and Nepali villagers do not harm the antelope.

Reasons to book your holiday with WildTrails