Like any living creature these elegant creatures live with dreams, hopes, fears & emotions. A challenge is what usually leads an animal to fight it’s own. Peafowls usually resort to it when they are challenged by their home, their harem of peahens, food source or when the life of their young is threatened. Each animal has a set of unsaid rules for this bout and are tuned to adhering to it without the need for a referee. Adult Peafowls who have a well-established territory which is rich with good food source and with a healthy population of females are often challenged by the young males for a fight like in any other animal species. The rules are simple, WINNER TAKES ALL.

Although I have seen this quite a few times already, I sat to observe this behaviour and learn more. The buildup was elaborate and as though an imaginary bell put the fight into motion and they jumped in hurriedly to flag off the fight. Their concentration levels were soaring and the world around them seemed to have disappeared for them. Each blow strategically executed with utmost precision.

The young usually have a lot to learn from the seniors who do this season after season. The fight ends once one of them realises that the other is stronger and backs off. The defeated graciously accepts defeat and moves on with a few new tactics learnt from this brawl. They continue to master new techniques and experiment them in their future encounters.

It is important to know and accept that loss is one of the possible outcomes of any contest. One might have lost the challenge but sure comes out stronger with a whole deal of new found knowledge from it.

Don’t interpret a loss as the end of the line,

For it teaches us our mistakes and prepares us better to shine. 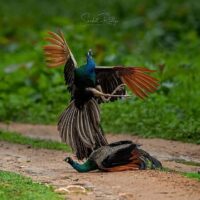 Presenting, the Red Collared Dove also called the Red Turtle Dove, is a small pigeon which resides in the Asian tropics and is commonly found otherwise. Having an extremely large distribution this Dove species is evaluated as a species that is of least concern.

Now coming to the question, how are doves different from pigeons? Are they really different at all?

Scientifically speaking doves and pigeons are one and the same. They are the exact same species which are then classified using these two terms. The American museum of natural history has said that the difference is more linguistic than taxonomic.

While, the word Dove came into English from the more Nordic languages whereas Pigeon came in from French. Although there’s no difference between them, colloquial English has categorised them by size. The smaller ones are called Doves while the larger cousins remain to being referred to as Pigeons.

Well it would have been simple if this was the only rule to follow while classifying the two apart but each region or person has their own way of differentiating the two and that’s where the confusion lies. However, the fact remains that all 308 variants called either a Dove or a Pigeon are a species of bird from the same Columbidae family.

Man made differentiation and classification is mostly superficial and made for ones own benefit & convenience. Religion, colour, caste, creed, sex, and many more such classification is merely made to create a divide and break one big unified front into fragments.

Don’t let yourself be classified by something created by Man,

By falling into this trap we only strengthen their plan. 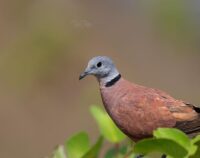 Mr. Sanket Reddy hails from Bangalore and he is well known in not just the business community but also outside of it. People recognize him not just for his skills as a business person but also for his humanitarian efforts, the details of which is often limited only to his close circle.