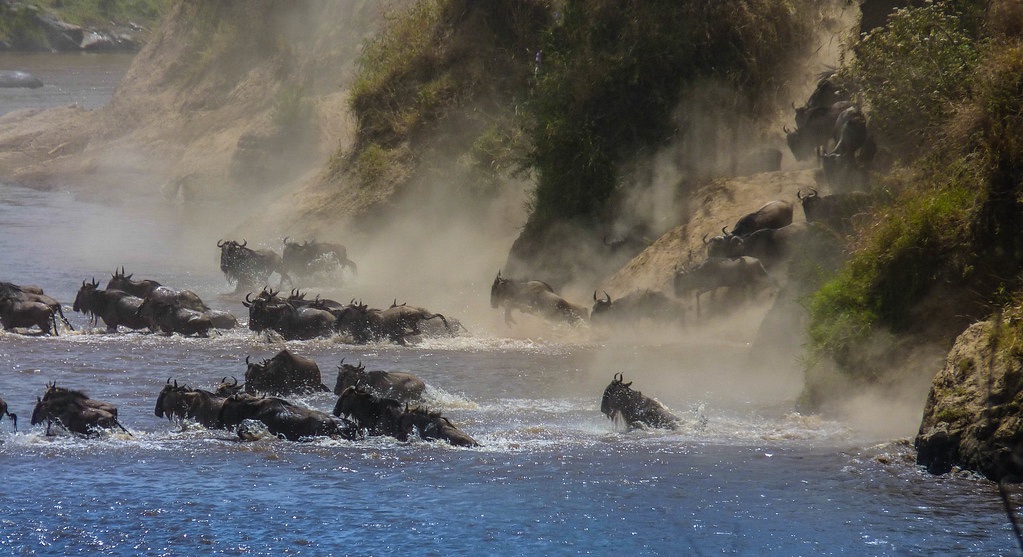 Each year around the same time, the circular great wildebeest migration begins in the Ngorongoro Conservation Area of the southern Serengeti in Tanzania and loops in a clockwise direction through the Serengeti National Park and north towards the Masai Mara reserve in Kenya. This migration is a natural phenomenon determined by the availability of grazing. The initial phase lasts from approximately January to March, when the calving season begins – a time when there is plenty of rain-ripened grass available for the 260,000 zebra that precede 1.7 million wildebeest and the following hundreds of thousands of other plains game, including around 470,000 gazelles.

During February, the wildebeest spend their time on the short grass plains of the southeastern part of the ecosystem, grazing and giving birth to approximately 500,000 calves within a 2 to 3-week period. Few calves are born ahead of time and of these, hardly any survive. The main reason is that very young calves are more noticeable to predators when mixed with older calves from the previous year. As the rains end in May, the animals start moving northwest into the areas around the Grumeti River, where they typically remain until late June. The crossings of the Grumeti and Mara rivers beginning in July are a popular safari attraction because crocodiles are lying in wait. The herds arrive in Kenya in late July / August, where they stay for the remainder of the dry season, except that the Thomson’s and Grant’s gazelles move only east/west. In early November, with the start of the short rains, the migration starts moving south again, to the short grass plains of the southeast, usually arriving in December in plenty of time for calving in February.

About 250,000 wildebeest die during the journey from Tanzania to the Maasai Mara National Reserve in southwestern Kenya, a total of 800 kilometers (500 mi). Death is usually from thirst, hunger, exhaustion, or predation.
[from wikipedia]

Here is a month-by-month analysis of migration and movements of wildebeest across the Serengeti and the Masai Mara which leads to the world famous crossings of the Mara river watched by thousands every year.

This pattern is compiled by watching and aggregating movements/migration data over more than 5 years. Please note that this wildebeest migration map & data will give an idea what might happen every year but please don’t use this as an accurate measure of what is going to happen. A little delay in rains here or there can affect the migration calendar but please do use it with a pinch of salt when you are planning your safari trips.

Hope this gives an approximate idea on how the clockwise circular migration of the herd from the Serengeti to Mara to back to Serengeti.

Month by Month Movements of the Wildebeest Herd

As the herds await their first Serengeti rains, they tend to move south to Ndutu. The herds should be seen anywhere between Lobo and Naabi Hill.

Usually, the wildebeest herds settle in and around Lakes Ndutu and Masek. These areas are lush and an ideal location for calving. Camping here during February is ideal for seeing the calving season but also the predators arriving into prey on the young.

Once calving is done, they move to the south-west parts of the Serengeti, mostly to the Ndutu-Kusini-Maswa region. They move slowly as now they move along with the newborn calves which are slower and also needs to be fed.

April is the Rainy month in the Serengeti area. Days are usually clear with rains in the late evenings. They move again slowly in April from the Ndutu-Kusini-Maswa region towards north-west towards Moru-Kopjes region. This area is high on lion density. Expect a lot of predator interaction here.

Now they start moving westwardly to the Serengeti’s western corridor towards a region which is north of Moru and south of Mokoma. Calves mature and they start to pick up the pace. Rains, of course, continue through may also but again due to the high concentration of predators, a lot of action happens in this region.

June is usually the Grumeti river crossing!! This is per se the first crossing in the migration before the great migration of Mara and this happens in the Serengeti region of Tanzania. In this period they pick up real pace as all calves are all matured and can easily keep up the pace with the adults. By the way, June also marks the end of the rainy season in this area

The rainy season has ended and it’s the dry season and also the season for mating for the wildebeests. They are all in the Grumeti reserves and they all will be approaching the Mara river and preparing themselves for the first Mara river crossings but in the Tanzania side

This is the time when the herds try to cross the Mara River in the Serengeti and/or Masai Mara, crossing the border between Tanzania and Kenya. This is the Great Migration which thousands arrive to watch it. The herd crossings are marked with the fight for survival against the crocodiles and against the predators who are waiting to welcome them on the other side of the river.
Except for the continuation of dry and humid weather.

Crossings of the Mara River continues and whoever have all crossed can be found in the greater Masai Mara area grazing the lush green grass and they start moving north again.
Expect the continuation of the dry and humid weather.

Mara river crossings almost never happen and in fact, the herds will start slowly move back into the Serengeti via Loliondo in search of lush green grass.
Weather will be warm.

This is when most of the herd has moved into Serengeti and can be found near the Lobo-Seronera Valley.
Weather will be cooler with sporadic rains.

The herds will be grazing and moving south and getting closer to the southern plains. Usual cooler weather and sporadic rains.

This concludes the month-by-month migration analysis. Hope this is of some use to you to plan your Africa Safari Trip.

We @ WildTrails, a group of passionate wildlifers, do organize these trips across India, Kenya, and Tanzania and if you are interested, do visit wildtrails.co or drop us an email at bookings@wildtrails.co