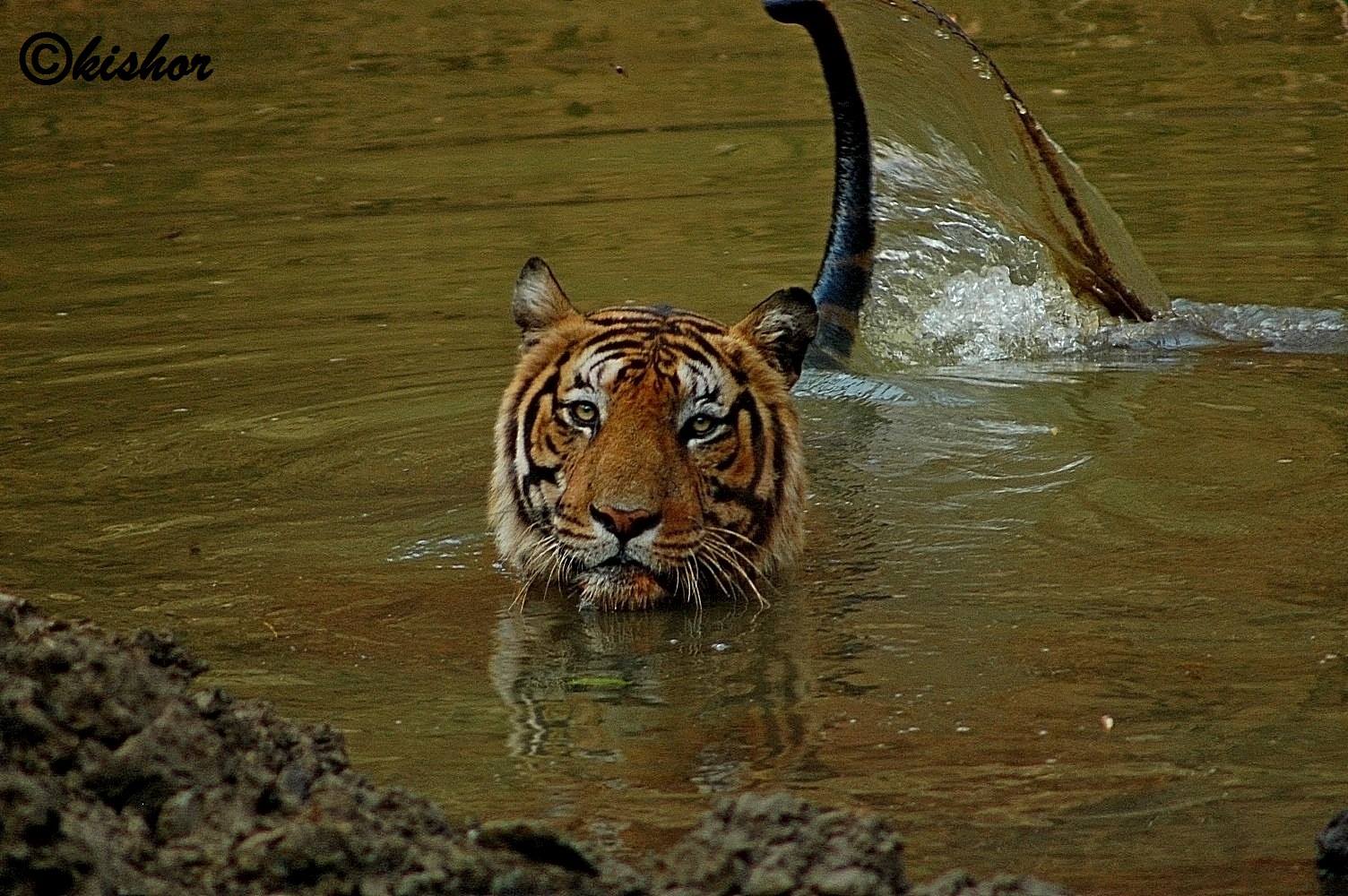 This article will give you the  top 5 Tiger reserves near Bangalore where you can do a weekend getaway easily. All are approximately 4 to 5 hours drive from Bangalore and are within 220-300 kms range.

We also have ordered these based on the sightings data that we have collected for more these tiger reserves / national parks / wildlife sanctuaries over  more than a year and based on our metric TSI* (Tiger Sighting Index tm).

Please note: We have  NOT classified/ordered  based on government reports of how many Tigers are resident in that park or based on the Tiger density (number of tigers per 100 sq. km) but purely based on how many Tiger sightings have happened over the last one year and what is the probability of tiger sighting based on last year data.

Below is our Top 5 Tiger Reserves near Bangalore

Kabini is not spoken in the same breadth as of the top tiger reserves in the country but it is as good if not better than any in the country. Almost unknown in the outside world but the most popular one among wildlife photographers (and they have kept it to be unknown for a reason I think). The only one from south which makes it to the list.

Actually Nagarhole is the national park and the southern part of it which is on the banks for the river Kabini (Kapila) is called Kabini. Nagarhole or Nagarahole is named after Nagarahole (Cobra river in the local language, Kannada), a winding river which runs eastwards through its centre. Situated in the two districts of Mysore and Kodagu in the state of Karnataka. It was originally constituted into a sanctuary in the year 1955 covering an area of 258 sq. Kms and subsequently enlarged to include the adjoining areas of Mysore district and now extends over an area of 643.39 sq. kms which was given the status of a National Park in 1983. 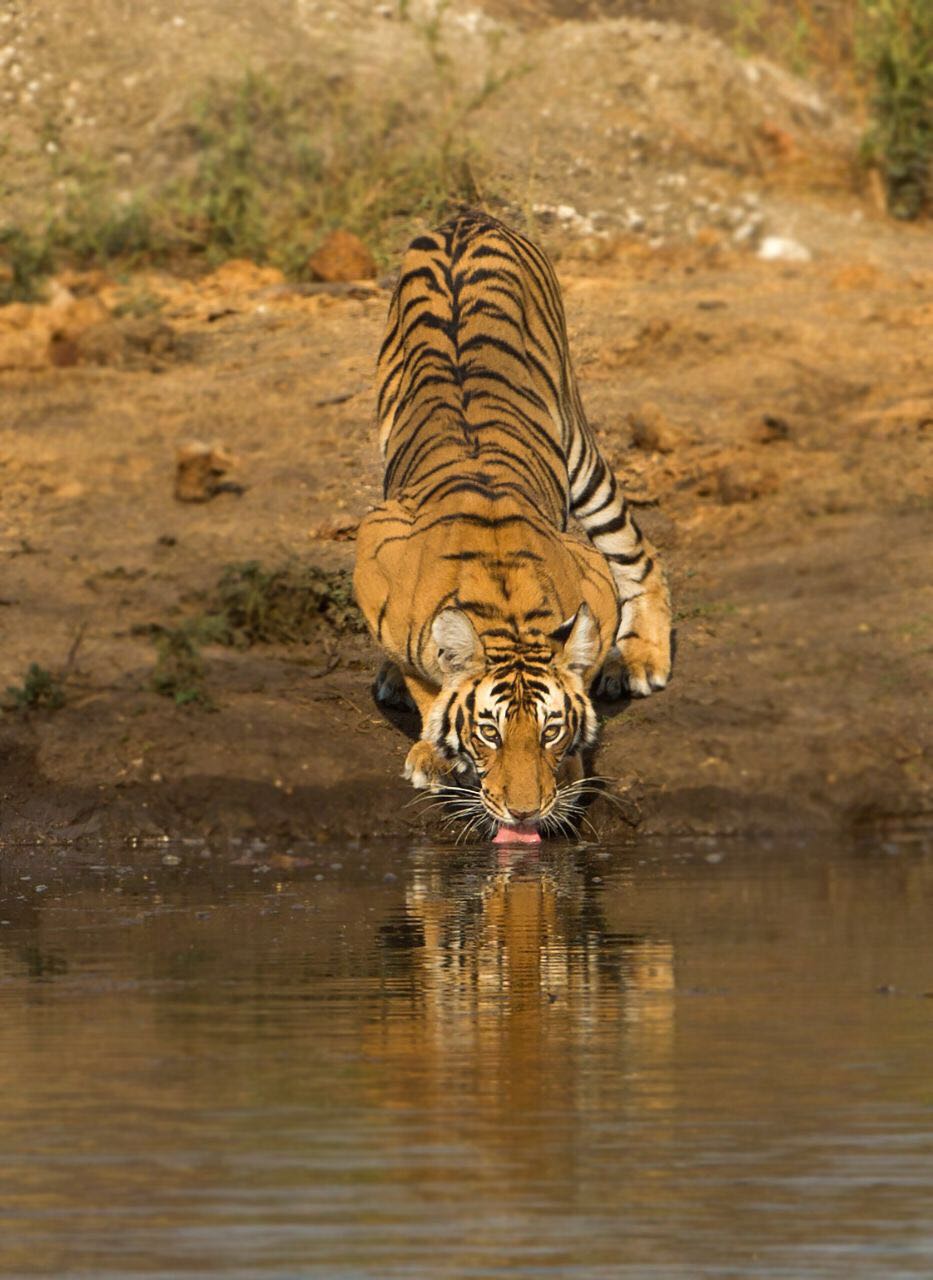 The birth of Nagarhole National Park can be traced to the notification of 285 Sq. km. Game Reserve way back in 1955, which included the reserve forests of Arkeri, Hatgat and Nalkeri in Kodagu. Subsequently, in 1974, reserved forests from the adjoining Mysore district were added to the Nagarhole Game Reserve, which was upgraded to the status of a National Park covering 643 sq. km”.

Kabini is 230 kms south of Bangalore and very well connected by good roads and approx. 5 hrs away. It is approx. 70 kms south of Mysore. Kabini is not just a Tiger reserve but also an Elephant Reserve and a Leopard lair and the only place where you get to see Black Panther (if you are super Lucky) 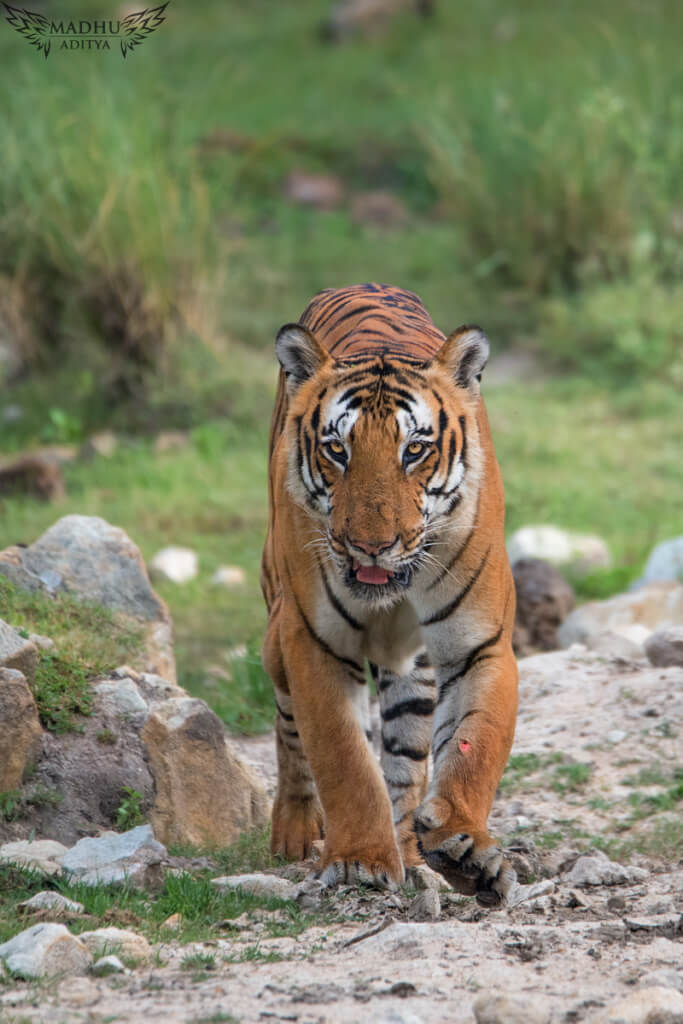 Bandipur National Park located where the Deccan Plateau meets the Western Ghats and the altitude of the park ranges from 680 meters (2,230 ft) to 1,454 meters (4,770 ft). As a result, the park has a variety of biomes including dry deciduous forests, moist deciduous forests and shrublands. The wide range of habitats help support a diverse range of organisms. The park is flanked by the Kabini river in the north and the Moyar river in the south. The Nugu river runs through the park. The highest point in the park is on a hill called Himavad Gopalaswamy Betta, where there is a Hindu temple at the summit. Bandipur has typical tropical climate with distinct wet and dry seasons. The dry and hot period usually begins in early March and can last till the arrival of the monsoon rains in June.

Nagarahole is named after Nagarahole (Cobra river in the local language, Kannada), a winding river which runs eastwards through its centre. Situated in the two districts of Mysore and Kodagu in the state of Karnataka. It was originally constituted into a sanctuary in the year 1955 covering an area of 258 sq. Kms and subsequently enlarged to include the adjoining areas of Mysore district and now extends over an area of 643.39 sq. kms which was given the status of a National Park in 1983. 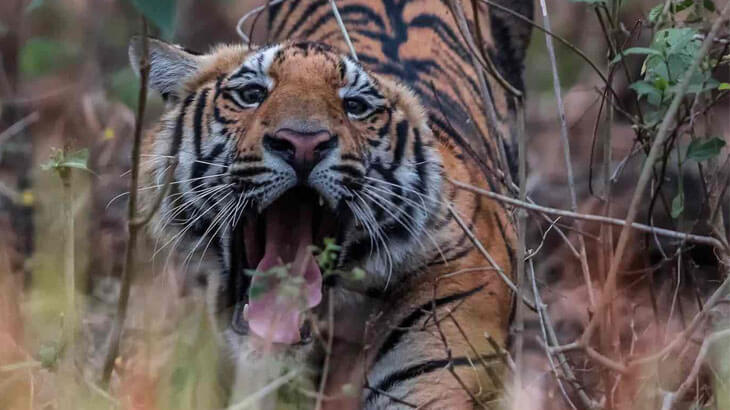 Bhadra Wildlife Sanctuary situated in the midst of Western Ghats in Chikmagalur and Shimoga districts of Karnataka.The Bhadra Wildlife Sanctuary boasts of a substantial tiger population It was declared as the 25th Project Tiger of India in 1998. Kallahathigiri is the higest peak in the sanctuary with a height of 1,875 Mts. Kemmannugundi and Bababuden Hills, are within the sanctuary. The lush green vegetation and lofty hill ranges are a beautiful and spectacular. 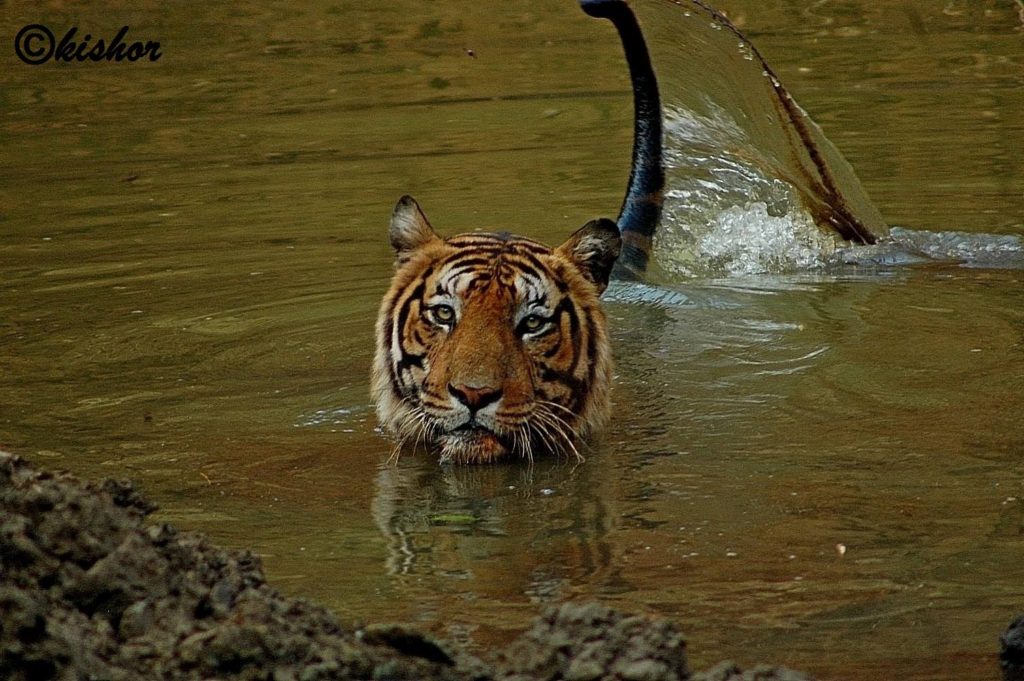 The wildlife sanctuary is called so after the Bhadra River which flows through the lush forests. The lush green vegetation of the Bhadra Wildlife Sanctuary consists of mostly moist and dry deciduous forests. More than 120 species of trees grow here, which include Teak, Rosewood, Mathi, Honne, Nandi, Tadasalu and Kindal. Bhadra is popularly known as Muthodi Wildlife Sanctuary, after the village on its fringes.

The Biligirirangana Hills, commonly called B R Hills, is a hill range situated in south-eastern Karnataka, at its border with Tamil Nadu (Erode District) in South India. The area is called Biligiriranganatha Swamy Temple Wildlife Sanctuary or simply BRT Wildlife Sanctuary. It is a protected reserve under the Wildlife Protection Act of 1972. Being at the confluence of the Western Ghats and the Eastern Ghats, the sanctuary is home to eco-systems that are unique to both the mountain ranges. The site was declared a Tiger Reserve in January 2011 by the Karnataka government, a few months after approval from India’s National Tiger Conservation Authority. The hills are located at the easternmost edge of the Western Ghats and support diverse flora and fauna in view of the various habitat types supported. 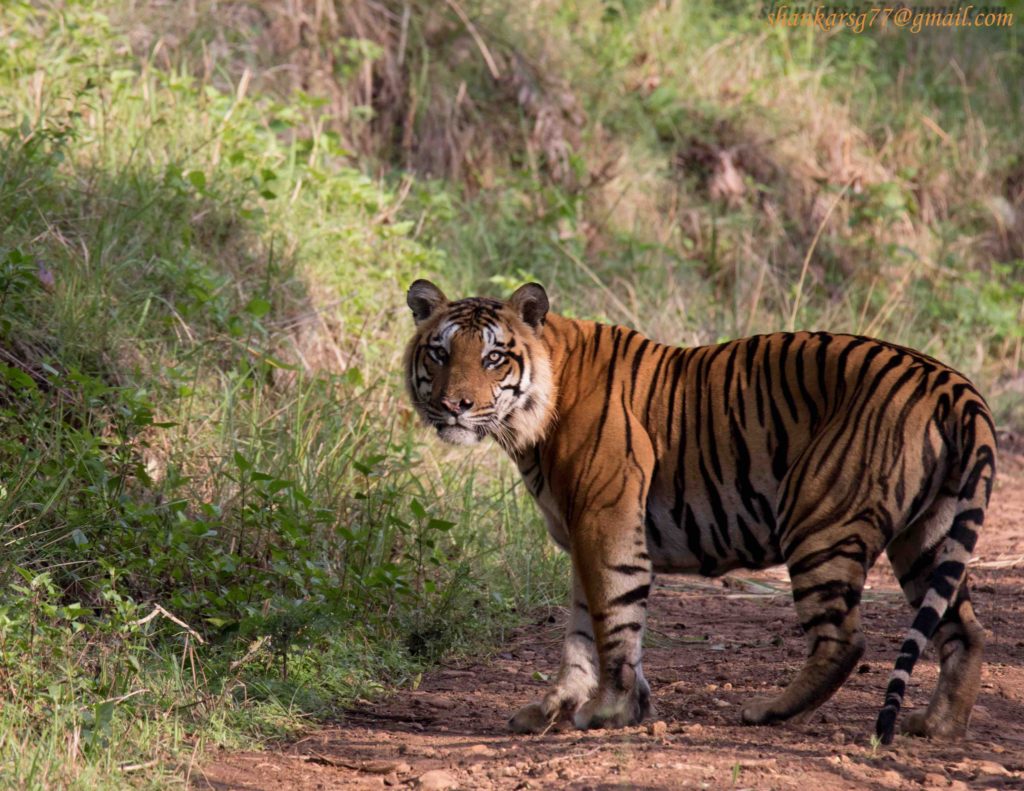 A wildlife sanctuary of 322.4 square kilometres (124.5 sq mi) was created around the temple on 27 June 1974, and enlarged to 539.52 square kilometres (208.31 sq mi) on 14 January 1987. The sanctuary derives its name Biligiri (Kannada for white rock) from the white rock face that constitutes the major hill crowned with the temple of Lord Rangaswamy or from the white mist and the silver clouds that cover these hills for a greater part of the year. The hills are in the Yelandur, Kollegal and Chamarajanagar talukas of Chamarajanagar District of Karnataka. They are contiguous with hills in Sathyamangalam Wildlife Sanctuary in Erode District of Tamil Nadu to the south. By road, they are about 90 kilometres (56 mi) from Mysore and 160 kilometres (99 mi) from Bangalore. The road leading to the village on top of the hills may be approached either from Yelandur or Chamarajanagar.

How to plan an Inexpensive Kabini Stay n Safari

Its Raining Tigers at Nagarhole Kabini. The Data Speaks…