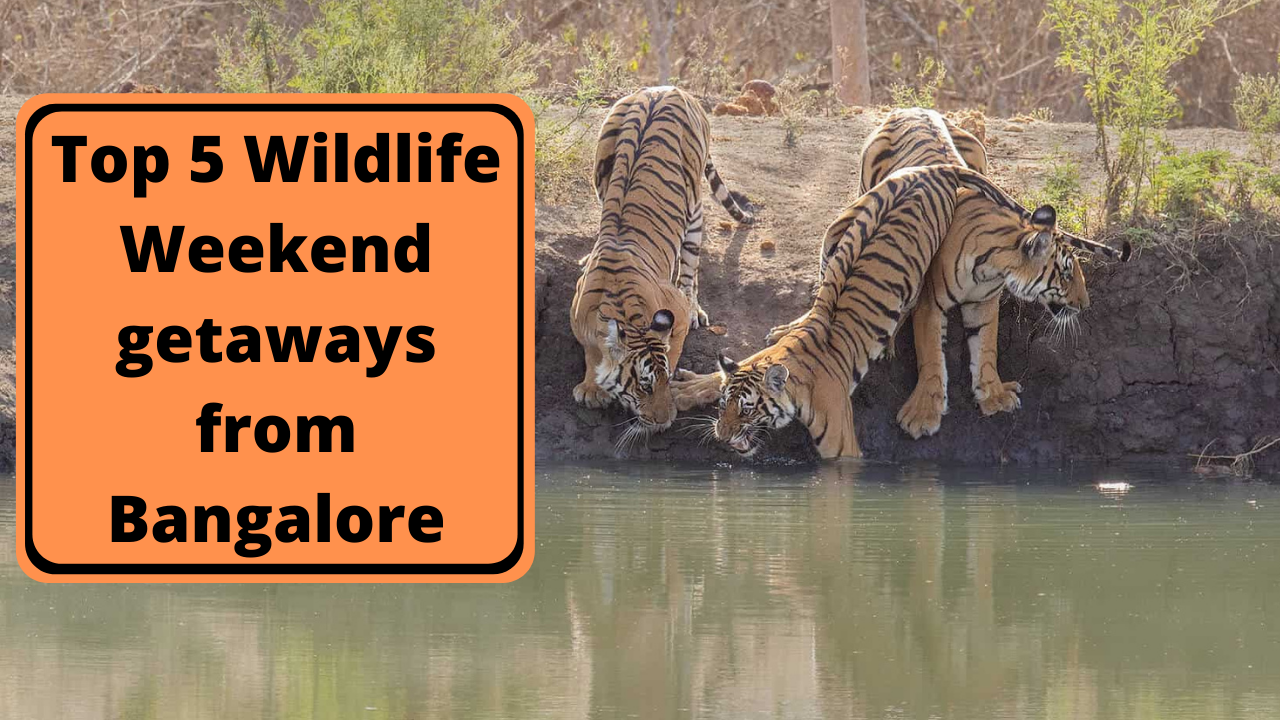 If you are visiting Bangalore (an IT professional visiting from a far off country or our beloved Desi visiting from a different city or just a traveler (Seriously? I doubt anyone visits Bangalore other than for business) and has a weekend to burn (don’t!!!!), try these places out. You will just love it. If you are a Wildlife Enthusiast there is nothing to convince but if you are not, give it a try and you will be amazed what exists just outside (all at a drivable distance) of this crazy bangalore. Fear is you might not like to come back to bangalore by the end of the weekend 🙂  Rather sitting in the hotel or wasting your valuable time in the concrete jungle of Bangalore, just try out the nature and the wildlife. If you don’t have access to transport, don’t worry, rent a self-drive car say with Zoomcar or rent a cab say with Savaari. Don’t have a camera, no worries again, rent one with Toehold or Tapprs or one of the 25+ camera/lens rental in Bangalore. (or download our App WildTrails of India which gives a complete listing of all resorts, car/cab rentals, Camera rentals in the town)

With no further ado, let’s unleash the best of the best wildlife getaways near to bangalore:

Bandipur National Park located where the Deccan Plateau meets the Western Ghats and the altitude of the park ranges from 680 meters (2,230 ft) to 1,454 meters (4,770 ft). As a result, the park has a variety of biomes including dry deciduous forests, moist deciduous forests and shrublands. The wide range of habitats help support a diverse range of organisms. The park is flanked by the Kabini river in the north and the Moyar river in the south. The Nugu river runs through the park. The highest point in the park is on a hill called Himavad Gopalaswamy Betta, where there is a Hindu temple at the summit. Bandipur has typical tropical climate with distinct wet and dry seasons. The dry and hot period usually begins in early March and can last till the arrival of the monsoon rains in June.

Best Time to Visit Bandipur National Park: October to May

How to get there (driving directions) : Bangalore  to Mysore Ring Road, Take a right onto Ring Road and take the Nanjungud exit, to Gundlupet and to Bandipur NP.

Expect to see : Elephants and if you are lucky, Tigers

Nagarhole is named after Nagarhole (Cobra river in the local language, Kannada), a winding river which runs eastwards through its centre. Situated in the two districts of Mysore and Kodagu in the state of Karnataka. It was originally constituted into a sanctuary in the year 1955 covering an area of 258 sq. Kms and subsequently enlarged to include the adjoining areas of Mysore district and now extends over an area of 643.39 sq. kms which was given the status of a National Park in 1983.

The birth of Nagarhole National Park can be traced to the notification of 285 Sq. km. Game Reserve way back in 1955, which included the reserve forests of Arkeri, Hatgat and Nalkeri in Kodagu. Subsequently, in 1974, reserved forests from the adjoining Mysore district were added to the Nagarhole Game Reserve, which was upgraded to the status of a National Park covering 643 sq. km

Best Time to Visit Kabini : October to May

There are 2 different places to go for the Safari – Kabini Backwaters Safari (South Nagarhole, Mysore) and Nagarhole National Park Safari (North Nagarhole forest, Coorg) (they are separated by approx. 70 kms and 2 hrs Drive between them)

How to get there (driving directions) :

Biligiriranga Swamy Temple Wildlife Sanctuary (BRT) is situated in the Biligiriranga Temple Hills which is a hill range situated in south-eastern Karnataka, at its border with Tamil Nadu in South India.

It is a protected reserve under the Wildlife Protection Act, 1973. Being at the confluence of the Western Ghats and the Eastern Ghats, the sanctuary is home to eco-systems that are unique to both the mountain ranges.

Situated 180 Kms, South of Bangalore, the forests form an important wildlife corridor between the Western Ghats and the Eastern Ghats, linking the largest populations of Asian Elephants and tigers in southern India. The most conspicuous mammals are the herds of wild elephants. The BR hill has been a good place for viewing large game and at the same time encountering numerous smaller life forms. The forests have been famous for the Gaur, a large Asian bovid. There are about 26 species of mammals recorded in the sanctuary. The other mammals include sambar, chital, the shy barking deer which are quite common here and the rare four-horned antelope.

Best Time to Visit: September to May

How to get there: Take the Bangalore – Mysore highway, and drive till Maddur. Turn left after leaving Maddur and drive till you reach Malavalli. Continue driving past Malavalli and get to Kollegal town and then to Yelandur and then to BR Hills (BR Hills is another 30 minutes drive from Kollegal)

Nearby Spots: Temple of Lord Ranganatha

Expect to see : Elephants and if you are lucky, Tigers, Leopards & 4-horned Antelope

Bhadra Wildlife Sanctuary is geographically located in northwest of Chikmagalur town in Karnataka state. This sanctuary has spread between Lakkavalli-Muthodi and eastern Bababudangiri regions in Western Ghats of India. BWS is a Project Tiger reserve covering an area of 492.46 sq. km (190.14 sq mi). Bhadra Wildlife Sanctuary has a wide range of flora and fauna and a popular place for day outings. The Hebbe Giri is the highest peak in the BWS with a height of 1,875 m (6,152 ft) above MSL. The BWS is surrounded by the hills and steep slopes of the Mullayanagiri, Hebbegiri, Gangegiri and Bababudangiri hills.

Safari: The wildlife safari in Bhadra is conducted by River Tern Lodge in their Open jeeps. There is no safari undertaken by the Government. No private vehicle is allowed.There are two time slots when this safari can Morning(6:30 AM) and evening(4:30 PM). It is a two hour safari. Ticket prices are really very steep (RS 1250 per person). If you are staying elsewhere (& not in River Tern), ensure you call them and be there 30 minutes before the start of the Safari.

How to get there: Take the Bangalore – Tumkur highway, and drive till Nelamangala and take Mangalore Highway Exit on the left left and continue on the Mangalore highway until you hit Channaraya Patna and after you cross take a right turn towards  Arsikere and keep going to Arsikere to Kadur to Tarikere. After crossing Tarikere, take the left that also has a Kuvempu University direction board. Travel 14 km till you reach Lakkavalli. At Lakkavalli, you will find a sign board to the River Tern Lodge, which is about 4km away or other lodges at Tarikere or Lakkavalli. BTW Road until Channaraya Patna is simply amazing and you can cover from Bangalore until there in less than a couple of hours and if you plan properly, you can reach the destination under 5 hours.

Alternate Route: From Bangalore: Drive towards Tumkur. Take the Shimoga bypass road at Tumkur (instead of going to Tumkur town) and cross Gubbi, Tiptur, Arsikere, Kadur, Birur, Tarikere. After crossing Tarikere, take the left that also has a Kuvempu University direction board. Travel 14 km till you reach Lakkavalli. At Lakkavalli, you will find a sign board to the River Tern Lodge, which is about 4km away or other lodges at Tarikere or Lakkavalli.

Expect to see : Elephants, Leopard Cats and if you are lucky, Black Leopards (Black Panthers)

Dubare is NOT your traditional wildlife trip experience but more of a elephant training camp where you get to bathe & Feed elephants along with elephant rides which are all a big hit with children. It’s a forest camp on the banks of the river Kaveri in the district of Kodagu, Karnataka. It is an important base for the Karnataka Forest Department’s elephants. The elephants for the Mysore Dussehra were trained at Dubare elephant camp. At present, after logging operations have ceased, the elephants have been practically retired except for giving some rides to tourists. There are opportunities for trekking, elephant rides, fishing, and river rafting. These activities are hosted by jungle lodges and resorts. The Forest Department also conducts some treks along well-defined routes.

Dubare itself is a patch of a forest in fact a deciduous forest that is richly endowed with a variety of wildlife, so it is not uncommon to spot herds of Sambar and spotted deer grazing on the banks of coming for a drink to the riverside. Another splendid sight that you will come across is that of Asiatic elephants taking a dip in the river or spraying themselves with dust. If river, you are lucky you may even spot the elusive crocodile basking in the sun.

Dubare also offers a treat to bird lovers as it is home to a variety of birds like partridges, woodpeckers, kingfishers and many more. The pleasant chirping of birds and the humming of various insects can always be heard in the background. You may also find peacocks strutting around and proudly displaying their plumage as the sun sets, flocks of birds can be seen flying across the twilight sky, which adds a special touch to the beauty of the place. 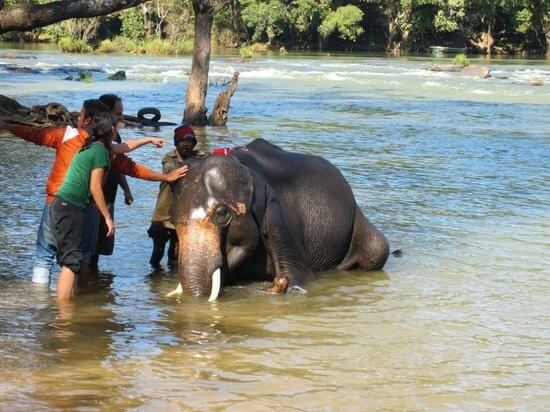 There is no Safari there but you get to trek in the wild along the river and a good place to spot animals, & birds.

How to get there: Take the Bangalore – Mysore Highway;After Srirangapatna take a right towards KRS which joins Mysore-Hunsur Road and take a right onto Hunsur Side. After Hunsur go towards Periyapatna and then towards Kushalnagar and From Kushalnagar, head towards  Gudde Hosur (4km from Kushalnagar on BM Road), then a left turn towards Siddapura. 15 km down the Siddapur Main Road, you’ll find the JLR Dubare Camp signboard. Take a left turn and about a kilometre drive would get you to the banks of the River Cauvery. Cross the river by boat and find yourself at the Dubare Elephant Camp.

PS: Please be a responsible wildlife tourist; While in the forest