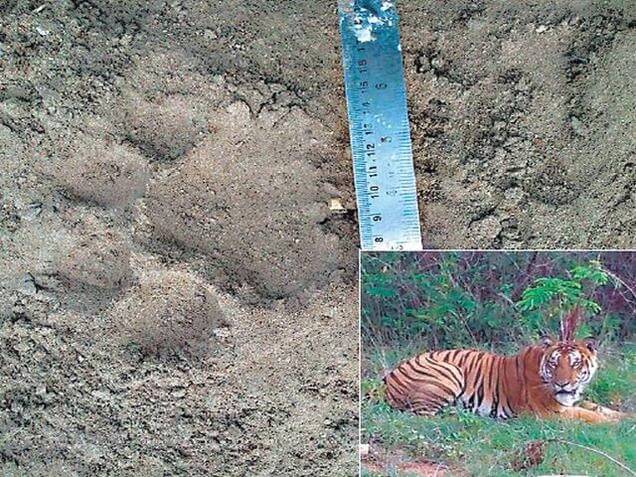 A full-grown tiger from the wild was spotted inside the Bannerghatta Biological Park (BBP) safari area at Mulegundekere (near animal rescue centre) which is adjoining Bannerghatta National Park (BGNP), located just 37 km from the City (Bangalore), on Saturday. This is probably for the first time since its inception. Park officials are upbeat about the possibility of now harboring the threatened animal.

While believing the tiger may have originated from the nearby Cauvery Wildlife Sanctuary (CWS) or the forests of Tamil Nadu, Executive Director of the Park, Range Gowda ruled out that the big cat had “strayed” into BNP.

“We had been seeing pug prints of a tiger in the area for around six months, and other strong indications that a tiger inhabits there. On Saturday, however, we got visual confirmation,” he said.

He believed the southern side of the 260.51 sq.km park – close to Rangaswamy Betta near Kanakapura – was now suited to host tiger population. “The prey density has been good, and the region is seeing an upswing in herbivores. The conditions are right for tigers,” said Mr. Gowda. 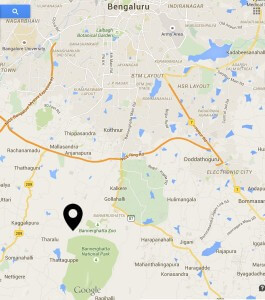 The carnivore was sighted around 3.45 pm by BBP bus driver Satish and safari visitors in the vehicle.

BBP Executive Director Range Gowda said that it was the first direct sighting in this area.
“The presence of a tiger from the wild in the Park can now be confirmed. Camera traps are being installed near the spot to get more details. The bus and jeep drivers have been told to be careful,” a BBP official said.

Further search results were ensued by the Forest officials after the sighting and have found more pug mark evidence (pug marks were found at Mulegundekere and Siggekatte (where captive elephants are housed)) and made them believe that there might be more than just one tiger now!!

The BBP has been carved out of BGNP and both share the same boundary. There have been instances of sighting wild elephants, sloth bear, leopard and herbivores near safari roads which are closest to the BNP boundary. Saturday’s tiger sighting was at one such location.

It is confirmed that it is a wild tiger as count of all captive ones is correct. Also, three years back a tiger was sighted in the BGNP. It is possible that this male tiger could have come from Cauvery Wildlife Sanctuary (CWS), as it is nearest to the BGNP (around 90 km) and is well connected by forest, he added.

Forest Officials at BGNP say. “This shows that BNP is conducive for tigers. Only the northern tip is frequented by humans, but southern tip is undisturbed. It is possible that there are tigers there,”.

But, tiger experts believe other wise. They opine that BNP is not conducive for tigers. Noted tiger conservationist Ullas K Karanth said tigers do travel long distances and this has been documented.

“It is possible that the tiger could have come from elsewhere and not just the CWS. However, BNP is not best suitable for tigers as people have low tolerance level. If there is cattle kill, the tiger will be poisoned or captured. There is also less of prey density and a lot of human intervention,” Karanth said.

Wildtrails of India – “Aggregator App for your Wildlife Trip”

PS1: The app will be released soon and will be charged $5 but those who register to our Beta program, the app will be free; please do sign up for the program here at info@wildtrails.in

PS2: Please be a responsible wildlife tourist; While in the forest  – no littering, no sounds, no feeding, no getting down from the safari jeep, no calls (put your cell phones to airplane mode or switch off). Remember we are visiting their home and when we are there, let’s follow their rules.