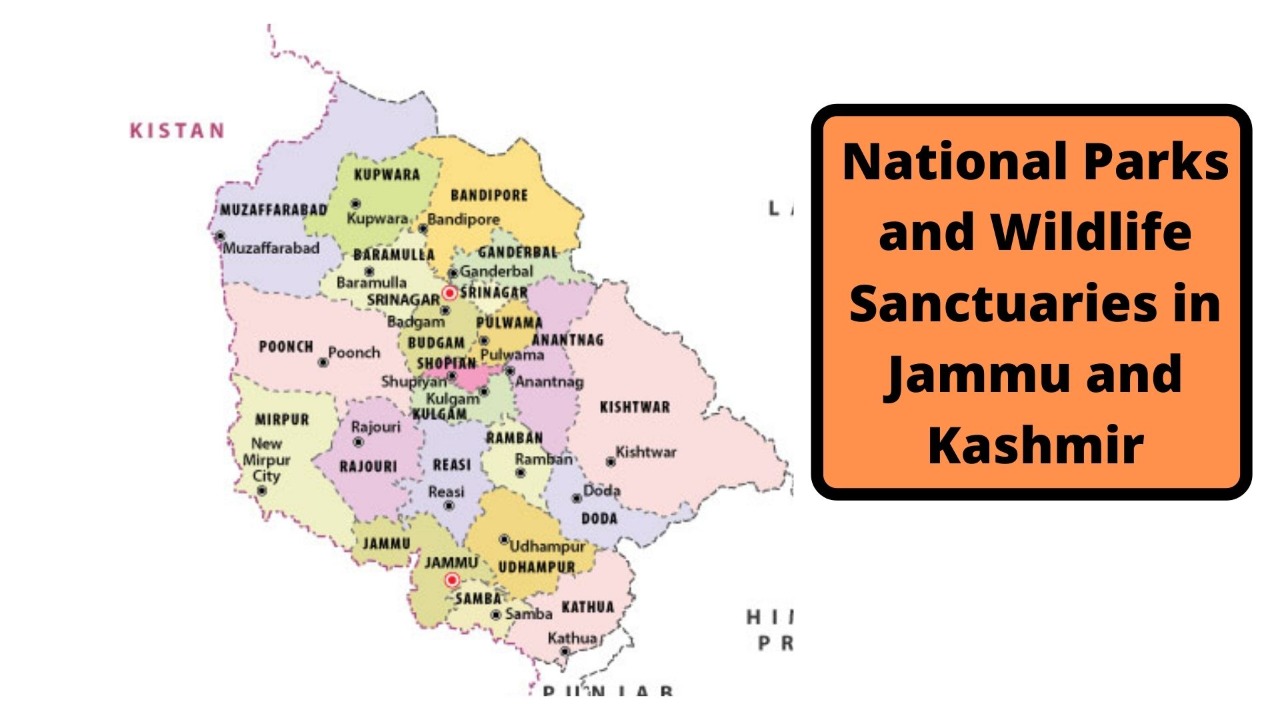 Resembling a crown to the nation on the map, Jammu & Kashmir was accorded as union territory by article 370 of the Indian Constitution. J&K was a place to explore since ages, making it one of the top tourist destinations. It is home to the Kashmir Valley, Chenab Valley, Sindh Valley and Lidder Valley. Besides scenic beauty, there are  flower gardens, apple farms and many more attractive locations. Major tourist attractions in Jammu and Kashmir include Srinagar, Mughal Gardens, Patnitop, Pahalgam, Gulmarg, and Jammu. Thousands of pilgrims visit holy shrines of Vaishno Devi and Amarnath every year and this has a significant impact on the state’s economy.

State Animal of Jammu & Kashmir is: The Kashmir Stag (aka Hangul)

The Kashmir stag (Cervus canadensis hanglu), also called hangul, is a subspecies of elk native to India. It is found in dense riverine forests in the high valleys and mountains of the Kashmir Valley and northern Chamba district in Himachal Pradesh. In Kashmir, it’s found in the Dachigam National Park where it receives protection but elsewhere it is more at risk. In the 1940s, the population was between 3000 and 5000 individuals, but since then habitat destruction, over-grazing by domestic livestock and poaching have greatly reduced that dramatically. Earlier believed to be a subspecies of red deer (Cervus elaphus), a number of mitochondrial DNA genetic studies have revealed that the hangul is part of the Asian clade of the elk (Cervus canadensis) and has not been evaluated by the IUCN

This deer has a light rump patch without including the tail. Its coat color is brown with a speckling to the hairs. The inner sides of the buttocks are greyish white, followed by a line on the inner sides of the thighs and black on the upper side of the tail. Each antler consists of five tines. The beam is strongly curved inward, while the brow and bez tines are usually close together and above the burr.

National Parks and Wildlife sanctuaries of Jammu and Kashmir

Besides the scenic beauty and high-altitude mountains, the state has a finite list of popular national parks and wildlife sanctuaries. Here is the list of the wildlife reserves in Jammu and Kashmir-

Situated in Baramulla district of Jammu and Kashmir, Gulmarg Wildlife Sanctuary spreads over 180 square kilometers. The sanctuary lies in the Pir Panjal Range of the Western Himalayas and the famous golf course, Gulmarg Golf Club is a part of it.

Hokersar Wildlife Sanctuary is popularly known for wetlands and breeding place for migratory birds of Jammu Kashmir. It is located 10 km from the capital city, Srinagar. The wetland here is the largest bird reserve in the Kashmir Valley.

The wetland consists of three zones with varied flora. The northeastern zone with various dense macrophytes, Trapa natans and Phragmites australis are found predominantly in the central zone, which is a large water basin. The southern zone is a silted portion and acts as a pastureland.

Jasrota wildlife sanctuary is situated on the banks of the Ujh River, around 60 km from Jammu. It spreads around 10 square kilometers. The best season for bird viewing is between March and May and mammal sighting is from September to March.

Lachipora district is located nearly 90 km from Srinagar and is popular for Lachipora Wildlife Sanctuary. The sanctuary was established in 1987 by the Department of Wildlife Protection and spreads around 80 kilometers.

Various kinds of forests and trees exist in Lachipora Wildlife Sanctuary that include Coniferous forests, Broadleaf forests, and meadows of Alpine pastures. Large numbers of herbs are found here. Bushes and shrubs of stunted growth can be observed in the isolated areas of the sanctuary.

Lachipora Wildlife Sanctuary is home to the rare species of markhor and goral. Himalayan Musk Deer is rarely found at high altitudes. Leopard, Brown bear and black bear are other creatures spotted here.

Located in the Baramulla district of J&K, Kazinag National Park or Qazinag National Park was established based on mounting pressure to conserve the rare markhor wild goat by Wildlife Trust of India. Kazinag  has warm summers and cold winters, and the temperature ranges between -20 to +30 °C.

The reserve is covered with Coniferous forests at low altitude, fir and spruce at higher altitude. Alpine meadows occupy the highest elevations. Other shrub species include Viburnum grandiflorum and Rosa macroflora that are dominant.

Nandini Wildlife Sanctuary is located around 28 kilometers from Jammu. The sanctuary derives from the local Nandini village and is spread across 34 square kilometers. It is primarily a bird sanctuary that is known among people for its pheasant population.

Overa Aru Wildlife Sanctuary is located on the edge of two villages of Overa and Aru, hence the name. The sanctuary was established in 1981 and spreads over 511 square kilometres.

The vegetation type here includes dense coniferous and sub-alpine pastures. Rajparian Wildlife Sanctuary is home to a lot of wildlife that include the famous Himalayan black bear, hangul, musk deer and many species of wild birds.

Ramnagar Wildlife Sanctuary spreads over a distance of 31 square kilometers. Located  just 6 kilometers from Jammu, Ramnagar Wildlife Sanctuary is one of the closest wildlife reserves from Jammu. The place is home to a lot of rare species that include barking deer, nilgai, Rhesus monkey, wild boar, and many more. Birds include white cheeked bulbul, jungle fowl, peafowl, golden oriole, jungle crow, mynah, and many others.

Named after the twin lakes, Surinsar Mansar Wildlife Sanctuary that are located in the corner of the sanctuary. The park occupies an area of 98 square kilometers and is located 58 kilometers from Jammu. The park is filled with abundant flora, fauna and avifauna which attracts tourists.

There are over 15 species of birds including black patridge, jungle fowl, peafowl green pigeon and many more. Fauna includes Goral, wild boar, leopard, deer, and many more.

Trikuta Wildlife Sanctuary was Established in 1981 and covering an area of about 31.77 square kilometers, is located in Katra. The park is yet to be commercialized.

Dachigam National Park is located 22 kilometers from the capital of J&K. The park has been a protected area since 1910, was upgraded and declared National Park in the year 1981.

Kishtwar National Park tip is located 4800 meters above sea level and spreads across 2150 square kilometers. The park provides a natural habitat to various species of mammals and and of birds. 13 vegetation types are represented here that include silver and spruce mixed with cedar and blue pine. The sub-alpine zone, from 3,000 metres to the tree line at 3,700 meters, supports mostly silver fir and birch. The national park is home to Himalayan snowcock and the brown bear.

Do’s and don’ts while on safari:

4. Do not miss your camera.

5. Always have an expert guide

2. No feeding to animals

3. Cell Phones switched off throughout the drive

5. No smoking or liquors

6. Do not over rely on properties for safari vacations.

Why To Book With WildTrails: